Is VoIP as reliable as traditional phone lines?

By Steve ChoyOctober 4, 2017 No Comments

Home » Is VoIP as reliable as traditional phone lines? 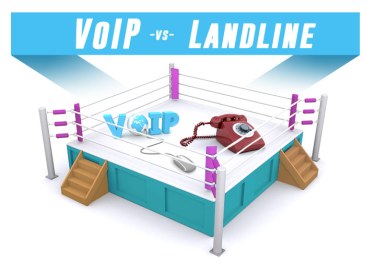 In the not so distant past, bandwidth was limited and firewalls did not play nice with the voice packets going through it.   Technology has advanced recently and bandwidth is no longer an issue.  Firewalls, however, still have some tweaking needed to make it work well with the voice packets.  Once set though, it really works well…or most of the time.  So why do most people think VoIP is unreliable?

VoIP is heavily reliant upon the internet connection.  If there is heavy internet traffic, or if there is a problem through the multiple hops to the server, the voice quality suffers.  I think all of us who have used VoIP have had days where we get a static, echoes, silence, or even dropped calls.  This is just something most of us feel we have to deal with to save a few bucks.  It is, after all, a trade-off…cheaper phone service with loads of features, but deal with some issues here and there.

Traditional phone lines are after all a century-old technology that works even when the power goes out.  There are very few instances if ever where you pick up a traditional phone and there is no dial tone.  It works, plain and simple.

For individuals, this is acceptable…after all, we have our cell phones to fall back on (who has a house phone these days anyway?).  For businesses though, it is not acceptable.  Nothing sounds as unprofessional as a phone system with quality issues.

So how do we get the VoIP phones to become more reliable?

Well, there are a few things that can be done. Keep in mind this is for businesses more than personal.

So with all of these options, VoIP is definitely more flexible, but is it just as reliable?  Again, it is so dependent on the Internet that at this moment it is not.  But hey, it’s cheaper, has more features, and is highly configurable.  Plus it’s kinda cool.