These days, it seems all VoIP companies are leaning towards unlimited calling packages.  They are following the model set by cellular companies.  In the not so distant past, cellular comanies offered set minute packages, allowing the customer to choose only what they needed at an affordable price (relatively speaking).  However, the overage charges became the unknown, and if customers would go over their allotted minutes, the bill could become astronomical.  As cellular companies offered unlimited packages, it became the popular choice.  It took away the unknown.

VoIP companies followed suit.  For small companies, it was easy on their pocketbook to know exactly what they will be paying without having to worry about how many minutes they use.  Whether they used 100 minutes or 100,000 minutes, the price was the same.  Again, it is an easy way to get rid of the unknown and have a set expense.

These days, the need for office phones are less than what it was 10, or even 5, years ago.  Everyone carries a cell phone and use it for most of their day-to-day calling.  It is convenient by not tethering a person to their desk.  Most important calls come to the individual’s cell phone.  The desk phone is convenient for keeping unimportant calls going to a different location or keeping a company presence.

So why pay for unlimited ca 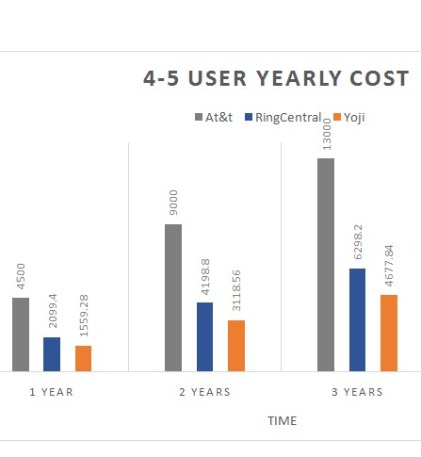 lling for desk phones?  It’s understandable for cell phones, but as the volume of calls to the office becoming less and less, there is no need to overpay.  Yes, it takes away the unknown of overage charges.  Yes, the cost is still less than what the old phone system cost.  And yes, it seems that is what everyone is offering.

We at Yoji never followed that ‘unlimited’ model.  Again, why overpay for something that is being used less and less everyday?  We give our customers a choice based on what they need.   We have various minute tiers that follow the average call volume based on the number of phones.  How about the unknown of overage charges?  Well, we start our customers on the average volume tier and then move them to the appropriate tier, as we see the numbers over a three month span.  We If there is an overage, we either move the customer up to the next tier the following month if it makes sense or leave them on the current tier if we see it as an anomaly.   We charge overage only if the customer demands to stay in the current tier, but goes over the minute package on a consistent basis.

Does the cost saving warrant the change?  Of course it does.  Look at the numbers.  Call us today and find out how much you can save.

Sound is an analog medium.  It uses waves to transmit the sound from one end of a phone connection to the other.  Telephone lines were designed to carry analog wave signals.  A great example of this is connecting two cans with a long string, stretching it tight and talking into one can and listening on the other.  When the line is tight, you should be able to hear clearly from one can what the other person is saying into the other can.

peaks into a phone, the analog signal is converted into digital signals, routed through an IP network, then reconverted to analog for the sound to be heard on the other end.  As the sound packets get routed, it goes through various networking equipment such as switches, routers, firewalls, and sometimes though the cloud (Internet).  Depending on how the equipment is set up, some packets could get lost, delayed or skewed.  This can cause issues such as cut outs, echoes, static or a disconnection.  Troubleshooting these issues can be burdensome and will require the expertise of someone well versed in not only VoIP, but networking and security.

The technicians at Yoji are all networking consultants.  We understand both realms, voice and data, and make sure that the network is set up properly for VoIP.   We set priority rules on the firewall to minimize delays of voice packets when it gets scanned, determine port settings for firewalls that may not play well with VoIP, and create separate virtual LANs for larger environments to create a clean voice segment and separate it from the disruptive data network.  We also work with the ISP to fix line clarity issues that can cause problems once it leaves the local network and gets to the public medium (Internet).  When we walk out that door during deployment, our phones are working properly or we put together a plan of action to get it working right.  We feel the time invested will create a better experience for our clients while lessening the support issues that arise from a voice system deployed improperly.